First of all, I apologize sincerely for my absence. Unfortunately, life happens and I simply didn’t have enough time to keep up with maintaining this blog. However, I should have more time now so I will gladly continue with my travel posts. 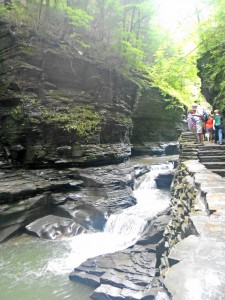 On our way back to New Jersey from Upstate New York in July 2015 we stopped at Watkins Glen State Park (1009 N Franklin St, Watkins Glen, NY 14891) since it was on our itinerary, but we didn’t get to do it before our departure day. It was also only a little out of our way and the new route took us along Seneca Lake, the largest of the Finger Lakes. The road is really scenic with panoramic views of the lake and surrounding vineyards.
After about an hour’s drive we arrived at Watkins Glen. The address above leads to a parking lot at the top of the glen. However, there is another parking lot at the bottom of the glen (971 New York State Bicycle Rte. 14, Watkins Glen, NY 14891).
As with most state parks, there is a vehicle fee at the entrance which is $8 per car. 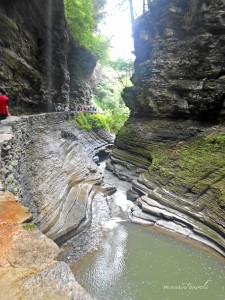 The gorge was created by glaciers during Ice Age. Since then water has eroded its way through the different types of rocks (sediment, limestone, etc.) giving the gorge its unique appearance, featuring potholes, cascades, waterfalls, and pools. The trail is about 2 miles long so it can be done in a reasonable amount of time but we didn’t know exactly how long it would take us so we only went halfway through the trail until Central Cascade.
Since we were already at the top of the trail we walked down Watkins Glen. It was unlike anything I had ever seen before. Man-made trails were carved along the gorge and even across it in places. 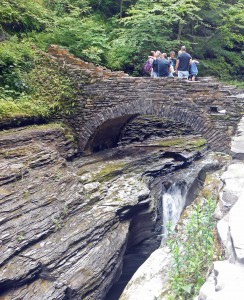 To get to the gorge from where we started you had to walk down 180 stone steps. I am glad we walked DOWN them, not UP them because they were pretty steep!

From there we followed the main trail along the gorge, which is called Spiral Gorge in this part because of its serpentine appearance. Here, the gorge is rather dark and narrow with moss growing on the rocky walls but there are parts that are less narrow so that the sunlight can actually reach there. 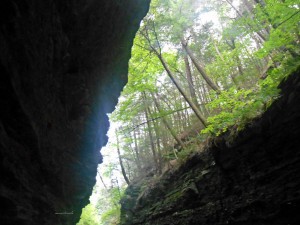 We saw stone formations I had never seen before. At some points the water had even smoothed the stone so much it almost looked like it was polished. 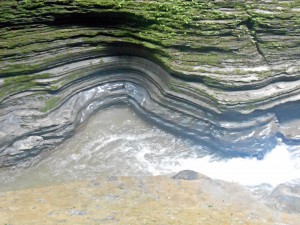 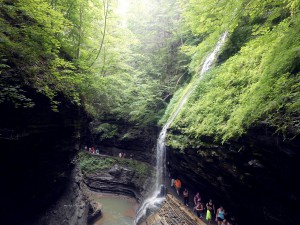 Shortly after that we made a left to cross the stream at Central Cascade.  A little further down the trail splits and we followed Lovers Lane which took us away from the glen to another trail called Indian Trail which runs parallel to the gorge. We took this way to get back up to the parking lot. This path was not as steep as the trail along the glen – especially with the steps at the top – so if you park on the upper parking lot this might be the easier way to get back to your car. There are also shuttle buses that run between the parking lots, for a fee of $5.

All in all, I highly recommend visiting Watkins Glen. I still remember it to be a beautiful place several months after we have been there. This is a place you should not miss when you are in the Finger Lakes area.
You do not need to be an experienced hiker to complete the trail, especially if you start at the upper entrance and make your way down.