The closest major city to the town where John’s relatives live is Rochester. The city of Rochester is mostly known for being the location of the Eastman Kodak company which was founded there in 1888 and still has its headquarters there today. 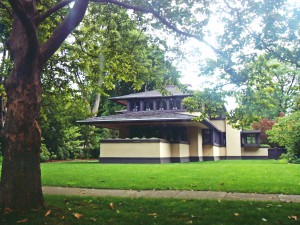 John’s uncle, who had lived in the area for many years, gave us a drive-by tour of the city, showing us some of the city’s architecture, including a house designed by Frank Lloyd Wright (Edward E. Boynton House, 16 East Blvd, Rochester, NY 14610) in an upscale neighborhood with mansions lining the streets around East Avenue. It was built in 1908 in Prairie-style. However, it’s a residential home and usually not open for the public. 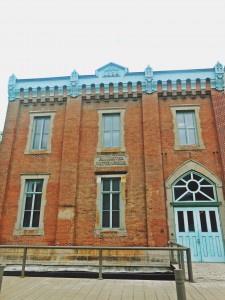 After driving through the city for a while we stopped at the High Falls District located in Downtown Rochester. It is named after the waterfalls on the Genesee River right around the corner. Here we visited the High Falls Visitor Center & Museum (74-78 Browns Race, Rochester NY, 14614, http://www.cityofrochester.gov/highfallsmuseum/), a small museum on the history of the city and the waterfalls. This area was once the center of Rochester‘s economic engine, due to scores of factories and businesses on both sides of the gorge using waterwheels to drive their workshops. In the early 2000’s, the city invested in the modernization of the district, trying to turn it into an entertainment district. However, this failed and it’s now a residential and business area with some restaurants.

From there we took a right turn which led us on the Pont De Rennes, a pedestrian bridge, leading over the Genesee River from where you have a fantastic view on the High Falls. The bridge is named after the French city of Rennes which is Rochester’s sister city.
From the bridge we spotted the Genesee River Brewing Company’s restored historic building which they turned into a microbrewery and visitor’s center in 2012 (25 Cataract St, Rochester, NY 14605, http://www.GeneseeBeer.com/Brew-House), and spontaneously decided we’d take a look at it. 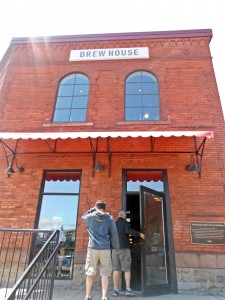 When we arrived there it was about half an hour prior to the next tour of the brewery would start so in the meantime we did a beer testing at a bar in the back of the building. For only $2 you receive four small glasses of beer of your choice, all brewed at the Genesee River Brewery. I tried the Cream Ale, Pilsner, Scotch Ale and Summer Shandy (displayed in that order on the picture below).

The Scotch Ale tasted best to me, John liked the Summer Shandy the most 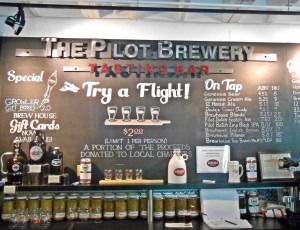 which was way too sweet for me, they have a really wide variety so everyone can decide on their own what they’d like best though.
The tour took place in the microbrewery in the back of the building. The guide started explaining the basic steps of the process of beer brewing and then showed us, in small, which utilities they use for brewing their beer in the big brewery next door.

The brewery tour, even though it was just a small insight and we didn’t get into to actual brewery, was really interesting and it was great you could try the beer they’re brewing for a really low price with a portion of it being donated to charity. 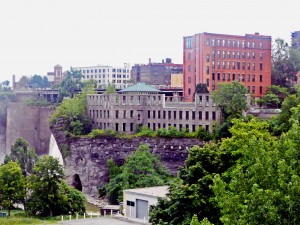 I was not too ecstatic about the city of Rochester though. I think most of the city just looks rundown and grey. There was a lot of construction going on and even though we got a little frustrated about road closures I thought it was a good sign, showing that the city is investing in improving the infrastructure and the city’s image piece by piece.
The High Falls Visitor Center & Museum is very small but it’s free, very informative and with lots of interactive features that make the visit more fun.