On our 3rd day in Upstate New York we went out to Lake Ontario. Lake Ontario is the smallest of the Great Lakes and forms the US-Canadian border in the state of New York. Its primary inlet is the Niagara River from Lake Eerie and it serves as the outlet to the Atlantic through the St. Lawrence River. 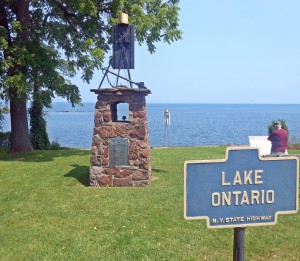 We caught our first glimpse of the lake when we stopped at the Lake Captain’s Monument and lakefront in Pultneyville, NY (County Road 101, Williamson, NY). From 1687 French Batteaux Men stopped there to trade with Native Americans. The first settler in this area was “Yankee Bill” Waters, a hunter, who lived there 1804. The monument is commemorative of the Battle of Pultneyville during the War of 1812 when British forces under Commander Yeo periodically raided coastal settlements for supplies. Steadfastly, the citizens of Pultneyville did not surrender.

From there, driving along the shore of Lake Ontario, we went on to Chimney Bluffs State Park (8105 Garner Rd, Wolcott, NY 14590, http://nysparks.com/parks/43/details.aspx) with a quick stop at B. Forman Park (4507 Lake Rd, Williamson, NY 14589) which is a nice recreation area with picnic tables, a playground and a beautiful view of the lake.

The Chimney Bluffs are large clay rock formations on the shore of Lake Ontario, created by a glacier around 12,000 years ago along with the erosive powers of wind, snow, rain and waves from the lake. During Prohibition smugglers used the area as a clandestine landing zone while transporting liquor from Canada. It was operated as a privately owned recreation area until it was acquired by the state of New York in 1963 and named a state park shortly afterwards.  The bluffs are eroding 3-5 feet annually. 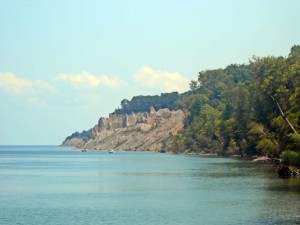 If you park at the end of East Bay Road you will reach the bluffs by walking west, either along the beach or on the Bluff Trail.
If you park at the Garner Road like we did, you will find a picnic area at the lakeshore and reach the bluffs by hiking the 1.25 miles Bluff Trail along the lake shore. Other hiking trails include the 0.75 mile Drumlin Trail, the 0.5 mile Garner Point Trail or the 1.75 miles East-West Trail. The trail was at parts muddy and we occasionally had to surpass puddles. 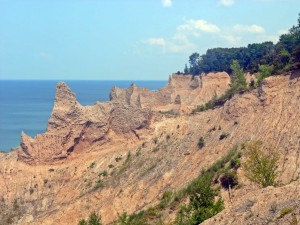 Expecting a beach-like area from which the bluff arose I wore the wrong types of shoes, sandals. If you plan to hike one or more of the trails I would definitely recommend wearing solid shoes. Since the trails are covered with trees the ground does not dry as quickly as it would in the sun so it will stay muddy even if it hasn’t rained in a few days. I managed to only get my feet a little dirty though

The view of the bluffs is beautiful from above as you’re getting closer to them on the trail. They look like they’re from another planet.
On our way there we spotted some boats on the lake close to the shore. You must have a fantastic view from the water. 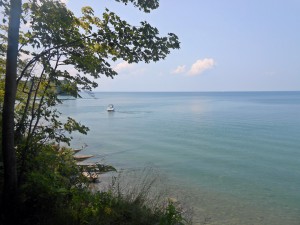