On our second day in Upstate New York we went to the town of Geneseo to visit the airshow on the grounds of the National Warplane Museum (3489 Big Tree Lane, Geneseo, NY 14454, http://nwmairshow.com/). This year it took place on the weekend of July 10-12, we went on the last day.
When John first announced that he wanted to go, I actually only agreed because I knew he would enjoy it and have a good time. When we arrived I had no idea what to expect. I have never been interested in aviation and know nothing about them, especially not war planes.
We arrived at the airshow a few hours after the gates opened at 7am. We just got there in time for the first part of the Aircraft rides at 9am. The planes take off from a field right next to the museum. 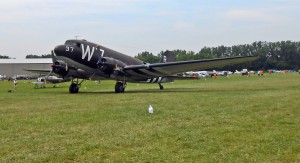 The first plane we saw taking off was already one of the highlights of the show – a C47 Dakota (Whiskey 7) which originally led in the second wave of the Normandy invasion on D-Day transporting paratroopers. Whiskey 7 later flew to the Normandy again for the 70th anniversary of the event in 2014. You could even book a ride on the plane for $300 per person. While it was in the air we saw some smaller single seat airplanes take off. Then they played the American and the Canadian National Anthems and honored veterans as well as those who are currently serving in the military. 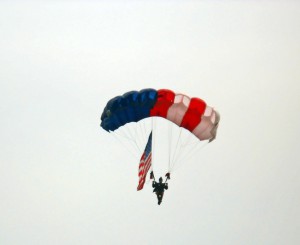 After that, paratroopers were released from the Whiskey 7, one of them was carrying the American flag. The others were putting on a show in the sky, twirling around and releasing colors behind them.
Once they landed, we left our seats to have a look at the planes they had on static display. We saw the “Miss Hap” (B-25), North American P-51 D Mustangs “Never Miss” and “Quick Silver”, Grumman TBM-3U Avenger “She’s the Boss” (which I particularly liked because of its name), B-25J “Take-off Time”, a National Guard Blackhawk helicopter and the Sea-Harrier Aircraft FRS1. 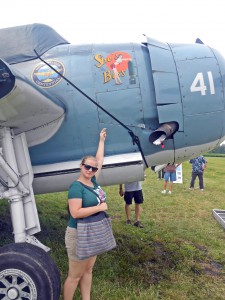 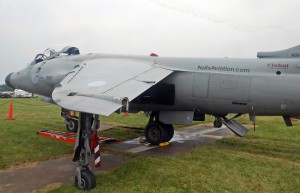 When we returned to our seats we saw a performance of the Interstate Cadet “Jelly Belly” trying to land on the roof of an ice cream truck as it drove along the runway. The pilot gave it a few tries but even though he almost made it once, he never fully landed on the truck. 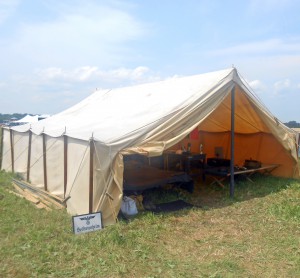 After that performance we went to a small reenactment area where they had WWII camps on display. I must admit that I was a little irritated by the German camp they had set up, not because they had a German camp and original WWII equipment but because there were people dressed up as German soldiers from that era. Being from Germany I just couldn’t understand why someone would volunteer to wear a Nazi uniform. I was confused whether this was just their devotion to reenactments or if they might even share the ideology (that might sound a bit silly though). This is what comes into a German’s mind when they see someone dress up like a German WWII soldier, or at least that’s what comes into my mind and we’re just not used to it. I felt really uncomfortable while I was totally fine visiting the Russian and the American camps. 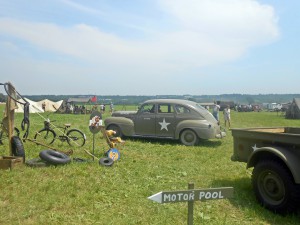 When we came back to our seats we watched the “Vandy 1” L-39 Albatross flying. That plane actually took off at the airport of nearby Rochester, NY, and it flew really fast. 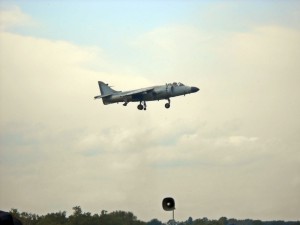 Later we saw the next highlight of the show – the oldest surviving and only privately-owned, flyable “SHAR” (Sea-Harrier Aircraft) – in the air. The plane was designed for the British Royal Navy and served in the Falklands War of 1982. It was accompanied by a F4F Wildcat from 1944 and demonstrated its hovering capability and ability to land on a short runway. 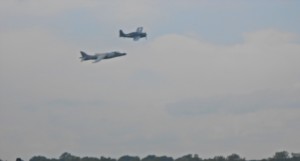 This was considered the grand finale of the airshow and we left afterwards.
I found the airshow very interesting and recommend going there even if you’re not too interested in aircraft because it certainly is impressive to see these old airplanes fly. The show is also suitable for children and they have special activities set up for kids, like an obstacle course including a climbing wall, a bounce house, and trampolines. If you happen to go on a sunny and hot day like we did I advise you to bring lots of water and sunscreen because there is no shade at all. I also recommend bringing a folding chair or picnic blanket. If it rains I advise you to bring rubber boots because the field consists of turf and you’d destroy any other pair of shoes walking through the mud. According to John’s relatives who we stayed with, it had rained a lot before we came to Upstate New York and you could still feel that the turf was very soft.