First of all, I want to apologize for being absent for the past 6 weeks. I took a summer break during which John and I went on vacation to Upstate New York to visit his aunt and uncle who live in the Finger Lakes area which provided me with new topics for this blog.
As I also received my Employment Authorization Card I got my New Jersey license and went on an intense job hunt. 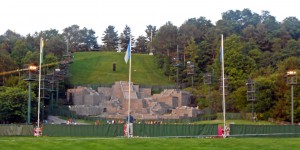 On our first night of our vacation, we went to the Hill Cumorah Pageant in Palmyra, NY. The pageant is held annually, this year from July 10-18 with performances starting at 9:15 PM on July 10 and 11 and 14-18. It attracts approximately 35,000 visitors every year. The script for the pageant is taken from both the Bible and the Book of Mormon and is presented by The Church of Jesus Christ of Latter-day Saints. It is a religious pageant displaying 10 scenes from the Book of Mormon: 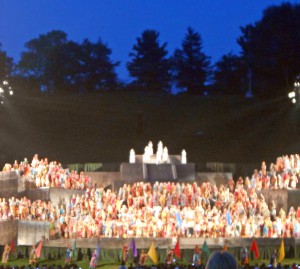 The pageant is held outside on a stage built into the hill next to the Hill Cumorah Visitor Center (653 NY-21, Palmyra, NY 14522, www.hillcumorah.org).

There is plenty of seating available and parking is provided on a field on the opposite side of the street.
When we crossed the street to get to the pageant place we came across protesters against the pageant and the Church of Jesus Christ of Latter-day Saints which I found odd because I had never experienced anything like that before. I also don’t think the Mormons mean any harm to anyone so I don’t understand the protesters. I just went there to have a good time and see something unique to the area and to learn more about something I had next to no knowledge about before.
I found the show very interesting and it helped me understand the Mormon belief system even though I am not very religious but am a baptized Catholic. There were many followers of the Church but also many people of different beliefs present as well. 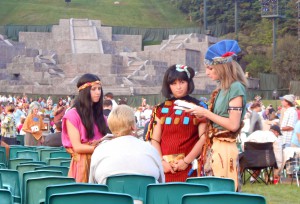 We were made feel welcome and comfortable by the organizers of the pageant. All actors are members of the Church and meander around the area dressed in their costumes before the show starts. The soundtrack is prerecorded by professional actors, with singing by the Mormon Tabernacle Choir, which showed when the sound failed for about half a minute during the performance and the actors just stood on stage like paralyzed.The performance is free and open to the public. Visitors can bring their own chairs or picnic blankets and drinks and food. Alcoholic beverages are prohibited on the grounds.
American Sign Languages interpretation is provided live for each show and head sets for Spanish translation are available as well.
Since the show is held outdoors, I advise everyone to bring bug spray.

If you see yourself in any of my pictures and want me to take it off my website, please contact me.