Inspired by an article on the website Roadtrippers (https://roadtrippers.com/stories/visiting-centralia-the-bizarre-ghost-town-with-an-eternal-underground-fire?lat=40.80972&lng=-96.67528&z=5), John and I made it a point to go here on our way back home from Gettysburg.
We had a hard time finding it at first. We tried to type it into our TomTom GPS but it’s hard to type in an address in an almost abandoned town. Main Street, Centralia, led us to Main Street in another town nearby but after playing around with the GPS for a bit we finally found Centralia. You should be fine if you’re able to just get directions to the town center. PA 61 and 42 are running through the town. 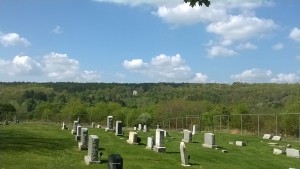 After getting there we still were a bit confused because we didn’t know where exactly to go. I must admit I didn’t research it as much as I usually do. We eventually decided to stop at the St. Ignatius Cemetery because I remembered reading about it. I realized later though it was Odd Fellows Cemetery I read about which is to the East on a side street while St. Ignatius Cemetery is located west and directly on the street we were coming in from.  We walked around for a bit and I was surprised seeing graves dated recently because I thought everyone had moved away. 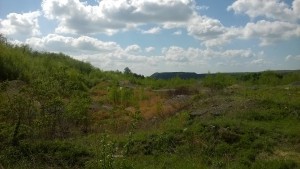 The reason Centralia is almost a ghost town today is that in the early 1960s a fire started in the coal mines underneath the town and it has, amazingly enough, never stopped burning. Eventually, most of the citizens of Centralia moved away because the ground subsided in several spots around town and there was too much toxic smoke as a result of the fires that made people, especially kids and elderly, sick after a while. Life just wasn’t safe there anymore. Gradually nearly all the residents of the town simply relocated (by necessity or by choice), however, there are still some people living there today. We actually met a guy who grew up there while we were walking around. He stopped his car to talk to us and showed us a book, a photo documentary, about Centralia and the mine fire. I rented it from the library after we got home. The book is called Slow Burn: A Photodocument of Centralia, Pennsylvania by Renée Jacobs from 1986. 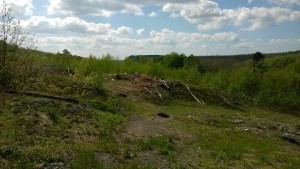 I was surprised to see what Centralia looks like, too. Reading that the horror movie Silent Hill was inspired by the town, I imagined it to be a spooky, grey, abandoned town with smoke rising from the ground everywhere, maybe even some holes in the ground where you could see the fire. Centralia is actually set in the Pennsylvanian mountains surrounded by a lot of green fields and trees, very beautiful. Overlooking the town is a Ukrainian church, about a mile or two further up the mountain.  We didn’t see any smoke coming from the ground and we didn’t feel the ground being hotter anywhere which might have been because it was a hot and sunny day when we arrived there.
The local we met explained to us though that when it’s colder and raining or snowing you can see smoking coming up from the ground which I think would give the town a whole different atmosphere but I still don’t think it would look too spooky, rather unique, different and interesting. 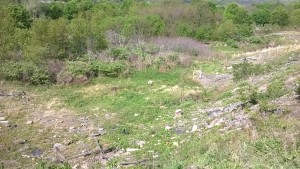 From the cemetery we walked up a dirt road. Most roads are dirt roads here, there are only very few actual roads and houses left. On one of the few remaining paved roads near the cemetery, someone had spray painted the oft-quoted Seinfeld catchphrase, “No soup for you!” We explored the area a bit but unfortunately couldn’t see anything that indicates a mine fire.
The town is still worth a visit. I would go on a colder day though to check out the smoke rising. I would recommend stopping by when you’re in the area.

2 thoughts on “The Ghost Town of Centralia, PA”