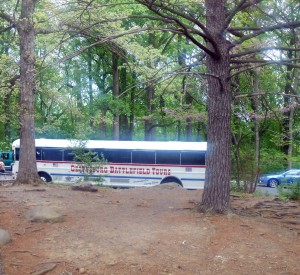 We booked a tour as part of a combo ticket at the visitor center of the park and got a ticket with a specified time when the tour bus would leave. Our tour started at noon.
The tour is accompanied by an official park ranger who gives you a lot of information about the battle, the battlefield, and the work of the park rangers as well as of the Gettysburg Foundation and many volunteers. 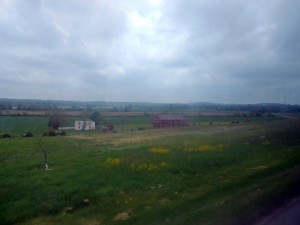 They want to have the battlefield look like it did when the battle took place, to have it look as authentic as possible. Therefore they’re planting trees, building fences, or renovating buildings with the techniques and materials they would have used around 150 years ago.
The battlefield is huge (4,998 acres!) and we toured it chronologically starting with locations from day one of the battle and ending with locations involving the third and final day of the battle.
The first thing I noticed was all those monuments scattered around the grounds of the battlefield. According to the park website, there are about 1,328 on the battlefield itself. At first glance they look like they’re just randomly placed, but the park ranger told us that they’re all placed where the regiments were located and face the directions they were facing during the battle. There are monuments for the states that had soldiers in the battle, monuments for the different regiments from those states, and even for individual soldiers. 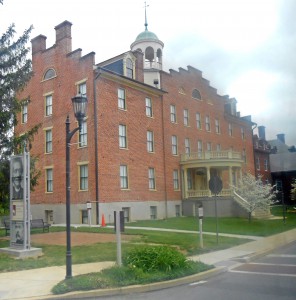 The tour takes you through town to McPherson Ridge, from there they take a loop passing the Eternal Light Peace Memorial and Oak Ridge. Then along Seminary Ridge Avenue passing the Lutheran Theological Seminary at Gettysburg (61 Seminary Ridge, Gettysburg, PA 17325, http://www.ltsg.edu/)  which we’ve been advised to visit, too, by a Civil War enthusiast co-worker of John’s, but didn’t go to because we already did so much that weekend.
We went South to Little Round Top, passed Devil’s Den (the bus couldn’t get to the site so we later explored it ourselves), went past the Wheatfield and Peach Orchard to the High Water Mark and the Angle and then back to the visitor center. 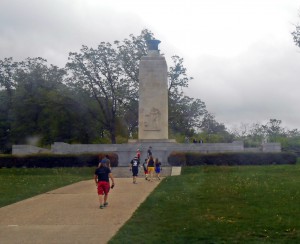 We first stopped at the Eternal Light Peace Memorial which commemorates the reunion of Gettysburg veterans for the 50th anniversary of the battle. Another stop was Little Round Top (Sykes Ave, Gettysburg, PA 17325) which is the second highest hill on the battlefield. From there we could see all the way back to the Eternal Light Peace Memorial. The hill was used by the Union army for, among other purposes, defense against the Confederate sharpshooters at Devil’s Den which is located just down to the left of the hill.
The last stop was at the High Water Mark which delineates the farthest point the Confederate Army reached during Pickett’s Charge on the final day of the battle of Gettysburg.
Every now and then we passed old buildings that are the homes of park rangers while they work at the battlefield. They’re not open to the public.
We also saw some living history groups along the route. The ranger said they often come there to reenact parts of the battle. 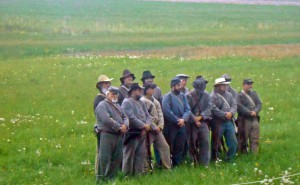 Since we only had limited time to explore the areas, we decided to drive back to the battlefield to explore some areas more on our own. 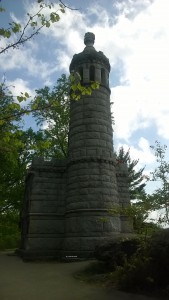 We drove back to Little Round Top where we went on top of the 12th and 44th New York Infantry Monument which looks like a small castle on top of the hill. We also visited the site where the 20th Maine Infantry, that John had read about before, held their ground which was located also on top of Little Round Top but more hidden in the woods.
From there we went down to Devil’s Den and explored the rocks where sharpshooters hid during the battle. 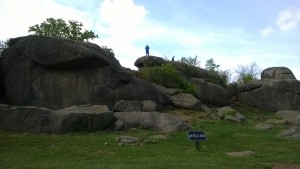 After that we wanted to go to the High Water Mark again but kind of lost our way. We had a map and everything is marked very well but after a long and exhausting day we lost our orientation and made a wrong turn. However, we found our way back quickly.
At the High Water Mark we explored the Angle and the Copse of Trees and walked to the Pennsylvania Memorial (Hancock Ave, Gettysburg, PA 17325) which is huge and commemorates all the Pennsylvanian soldiers that fought at Gettysburg. You can also visit the top from where you have a panoramic view of the battlefield. 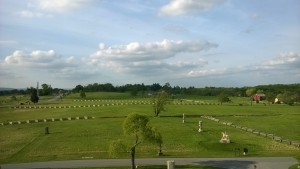 I really enjoyed both the organized tour and our little self-guided tour. The park ranger tour is very informative and they give you an insight about what happened and is still going on at the battlefield. They’re always happy to answer questions.
The battlefield is so huge that you need more than just a few days to explore everything but if you just pick the locations that you’re interested in the most you’ll definitely be able to fit it into a day or two.