First of all, I’m sorry it took me a while to publish this post. The internet at our apartment was down earlier this week.

Our hotel was in the historic district of Gettysburg, within walking distance of a multitude of souvenir shops and restaurants. 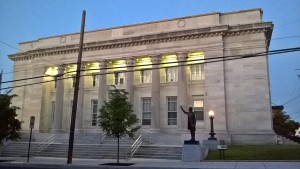 After we came back from the battlefield we decided to take a walk and see what the town had to offer. At home we had decided that we wanted to have dinner at the Dobbin House (89 Steinwehr Ave, Gettysburg, PA 17325, http://www.dobbinhouse.com/) which is a historic tavern and inn with a little gift shop from 1776. We had seen some high school students having their prom pictures taken around the battlefield and it seemed like the prom was taking place at the Dobbin House so we couldn’t eat there. While we walked there we overheard someone recommending the O’Rorke’s Family Eatery (44 Steinwehr Ave, Gettysburg, PA 17325, http://www.ororkes.com/) to other tourists and since it was right across the street we decided to go there. The restaurant seemed very crowded but we got a table right away since we didn’t insist on a table outside. The restaurant has a very homey atmosphere and some Irish live music at night.
John and I shared a Crab Dip as an appetizer. The crab dip came in a bread bowl and with Nacho chips. It really tasted great. As an entrée I had a New York Strip steak, salad and fries. The salad came early so I was finished with it before the steak arrived. The steak was huge and I couldn’t eat much more than half of it but it tasted amazing. I didn’t even touch the fries because the steak was just too much.
We decided not to have any dessert at the restaurant because we were so full but on the street we came across an ice cream and candy shop called Kilwin’s 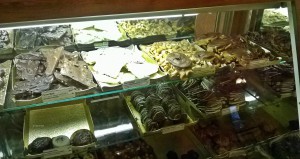 (37 Steinwehr Ave, Gettysburg, PA 17325, https://www.kilwins.com/gettysburg), a chain I’ve been to before in Clearwater, Florida, only I didn’t realize that until later. I had my favorite type of ice cream, Cookies and Cream. It was delicious but it was really a lot again and I couldn’t finish it. While eating the ice cream we walked from Steinwehr Avenue to Lincoln Square, 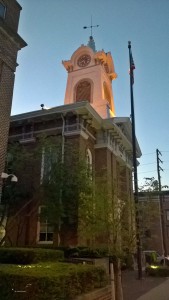 along stores, restaurants and hotels, and as the sun set we saw a lot of ghost tours walking in the streets. Our hotel, the Farnsworth House (401 Baltimore St, Gettysburg, PA 17325, http://www.farnsworthhouseinn.com/), offers ghost tours and a tour around the haunted basement of the original Farnsworth House. We didn’t do any ghost tours though because we were so exhausted from the day but they seemed fun from afar: Tour guides were dressed in historic clothes and carrying old fashioned lanterns telling stories about ghosts (probably soldiers from the battle) that are haunting the city. 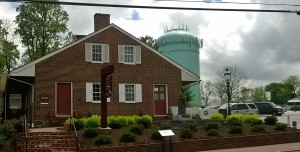 We also went to the Jennie Wade House (548 Baltimore St, Gettysburg, PA 17325, http://www.jennie-wade-house.com/) but didn’t go inside even though we had planned to when we were still at home but we had so much input the day before – especially me because I had never been there before.
After our stroll around town, John and I had lunch at the patio of our hotel. It’s a nice setting to sit in the garden and our waitress was dressed in period clothing. The food was great. We had flatbread with cream cheese and cranberry chutney with grapes and oranges, which was all delicious. As an entrée John and I both had a BBQ Pulled Pork Sandwich with a side of potato chips which tasted great, too.
After lunch we hit the road homebound.