As mentioned earlier, during our trip to Gettysburg, John and I stayed at the Historic Farnsworth House Inn (401 Baltimore Street Gettysburg, PA 17325 http://www.farnsworthhouseinn.com/home.html). 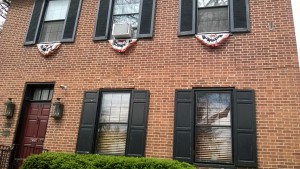 The hotel is very conveniently located since Baltimore Pike is the road you’ll take from the visitor center into the town of Gettysburg where it becomes Baltimore Street. It consists of the original Farnsworth House from 1810 and the garden rooms, all named after historic personalities or people with a special bond to the house:

The house itself got its name from Confederate Brigadier General Elon John Farnsworth, leader of an ill-fated charge after the failure of Pickett’s Charge.
During the battle the house was used as a shelter for Confederate sharpshooters, one of whom is believed to have accidentally killed Jennie Wade.
It’s now claimed to be one of America’s Most Haunted Hotels. The Sara Black Room is considered to be one of the most haunted rooms of the hotel while the little boy Jeremy’s ghost is supposed to be the most active ghost. The boy died after his accident in the room that is now the bathroom of the Sara Black Room[1].

We stayed in the Jennie Wade Room in the garden portion of the house. 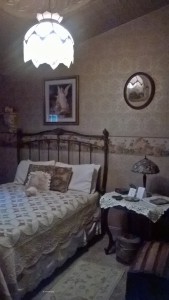 This is a newer part of the inn and located in the center of the garden and right next to the outside dining patio of the restaurant. From our window we could have watched visitors having their meals but we had the curtains shut since they’d have been able to look into our room, too. The room was $160 per night.
The room contained all kinds of odd details:
First of all, when entering the room I was startled because there was a cat lying on our bed. It looked delusively real which was because it was a real cat, albeit a stuffed dead cat. For us to be able to sleep in the bed, John had to put it away because I wouldn’t touch it.
To the right of our bed, on the wall to the bathroom, was a giant painting of a guitar-playing monkey. 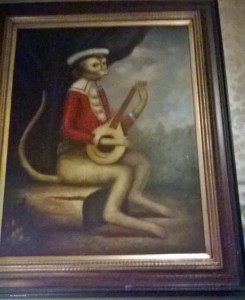 It’s one of those paintings where the eyes just look at you no matter what angle you’re standing towards it. To me, this was the creepiest thing in the room. It took me a long time to get used to it because I felt watched all the time.
On the opposite wall there was a painting of a little girl and a dog. The girl is obviously playing hide and seek with someone who is not shown in the picture (or maybe an imaginary friend!?) as she has her arms leaned against a wall interlocked in front of her face but she’s peeking and, just like the monkey, looking directly at you, but the painting is smaller so it’s less obvious. Like all spooky girl characters in horror movies, she’s wearing a long old-fashioned white nightgown.
Other than that there was a metallic frog with an umbrella standing between the gas fire place and the window and a metallic bird cage with paper butterflies above it.
The curtain pole above the window was held in their mouths by two golden lion heads.
The whole ensemble of the interior was just a mixture of oddities that didn’t fit together but gave this room a unique and appropriate atmosphere for a haunted hotel.
On the nightstand we found a book which served as a guestbook where people wrote about their experience with the room and mentioned any paranormal activities. Some people heard a knocking on the door or a cold hand touching their shoulder in the shower, misplaced keys or vanishing toilet paper.
We had a good night’s sleep though with no activities. John said though that he heard a woman crying for just a few seconds at some point. I didn’t hear it though so it might have been just a dream. He scared me when he said that he had proof of ghostly activities. When he said that the bathroom door wasn’t in the same spot he had left it before he went to bed I was relieved though because I went into the bathroom at night, so I was the ghost.
As we were very exhausted and wanted to sleep in before checking out we skipped breakfast that morning.
The reception to check in and out is located to the left of the patio (to the right when you enter the garden from the small parking lot – for free parking for hotel guests – in the back) in a gift store that is part of the Farnsworth House.