After purchasing Lucasfilm at the end of 2012, Disney began celebrating Star Wars Day annually on May 4. A celebration of that day was first organized in Toronto, Canada, in 2011 and has been celebrated by many Star Wars fans around the globe even before Disney started its celebration of the day.
Star Wars Weekends, however, have been an annual special event at Disney’s Hollywood Studios (351 S Studio Dr, Lake Buena Vista, FL 32830, https://disneyworld.disney.go.com/destinations/hollywood-studios/) since 2003, as well as in 1997, 2000 and 2001. Star Wars Weekends usually take place on four consecutive weekends in May/June.

Last year I had the chance to attend Star Wars Day at Disney’s Hollywood Studios as well as one day of the Star Wars Weekends. 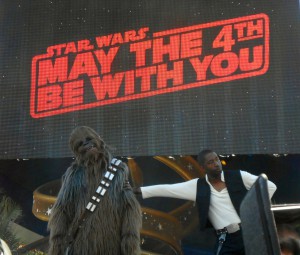 Star Wars Day 2014 was celebrated on stage in front of the Sorcerer’s Hat with a show and preview of the upcoming Star Wars Weekends that month. Videos showed the trailer of the Star Wars Rebels TV show that premiered in October last year and special behind the scenes videos. Chewbacca and two Ewoks made a special appearance on the stage and there was a trivia contest where people from the audience could win Star Wars merchandise.
My friends and I also decided to do the Star Tours ride at Hollywood Studios to celebrate the special day. That ride is definitely more crowded on a day like that though, so if you’re not a fan of the Star Wars films but would like to go on the ride on May 4 or during Star Wars Weekends I would recommend getting a FastPass in advance, or just visit the park on another day if possible.

The Star Tours ride (https://disneyworld.disney.go.com/attractions/hollywood-studios/star-tours/) is a 3D flight simulation. You sit in what is called a Starspeeder 1000 which will take you to planets of the Star Wars saga. It was one of my favorite rides so I did it several times and traveled to Tatooine, Naboo, Kashyyyk and Hoth (the scenario changes all the time). C-3PO accidentally becomes your captain and one of the travelers is the Rebel Spy (once it was me!) who you’re on a mission to save. Sometimes you succeed in your mission but other times your ship ends up captured by the Empire.
The front of the ride resembles the forests of Endor amongst which you’ll spot a giant AT-AT. You then enter a mock-up of the shield generator bunker from Return of the Jedi and head to the Star Tours spaceport where the Starspeeder is waiting for you.

A couple of weeks after Star Wars Day I attended Star Wars Weekend. I got myself a name tag which had my name on it written in Aurebesh letters. 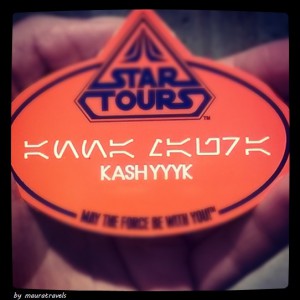 The name tags can be bought in Darth’s Mall which is all the way in the back of the park, close to Toy Story Mania, and offers all kind of regular Star Wars merchandise and special Star Wars Weekends merchandise that changes every year. You can personalize your name tag by choosing your planet and title. My name tag had Kashyyyk and I was a Rebel.
I was not too interested in all the shows and autograph sessions with celebrities from the Star Wars franchise so it didn’t matter to me that I arrived rather late at the park and couldn’t get any FastPasses for them anymore. If those are important to you, you should try to get a FastPass for those in advance or very early that same day, meaning when the park is still closed. Lines will already be LONG by early mornings. Instead I did what I hadn’t been interested at all before – character hunting. 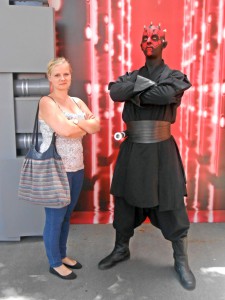 I stood in line to have my pictures taken with characters from the movies. Unfortunately, I didn’t get to meet everyone I wanted because the lines are long and characters sometimes trade their spots with someone else to go on break so you might not get to see the character your standing in line for but the next one instead. If you’re really determined, you can always get in the same line again, or you can come back another day. 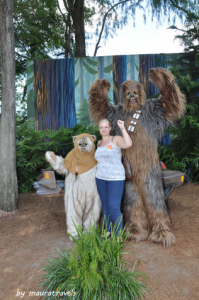 The most popular characters with the longest lines were Princess Leia and Luke Skywalker with C-3PO and R2D2 (they were rotating all the time; I saw them all but only got my picture taken with Leia), Chewbacca, an Ewok, and Darth Vader. Some characters just stroll around the park, like Star Troopers, Tusken Raiders or Jawas. 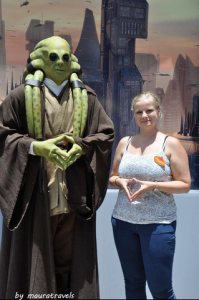 I didn’t even consider trying to get into Star Tours that day because it was so crowded.

Those were some of my favorite days at Disney World though. I usually hated the crowds in the parks and rather went when there were less people but Star Wars Weekends was definitely worth it. Unfortunately, I never made it to see the special fireworks, Symphony in the Stars, though which means I’ll have to go back someday.

Happy Star Wars Day! May the Fourth be with you! 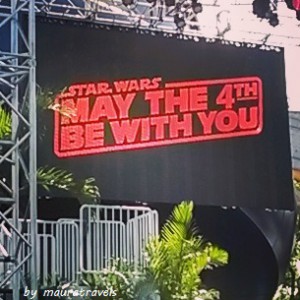