John and I went to Medieval Times (http://www.medievaltimes.com/) yesterday which is basically an indoor reenactment arena for knights’ games.

There are nine locations for those arenas in North America:

We went to the one in Lyndhurst (149 Polito Ave, Lyndhurst, NJ 07071, http://www.medievaltimes.com/lyndhurst.aspx). 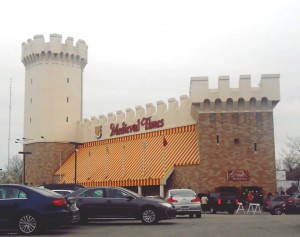 We arrived at the castle about an hour early because on the ticket printouts it said the doors would be open 75 minutes before the show starts and tables are given on a first come, first serve basis. There was only a short line to get inside the arena and it took us only 5 minutes to get in.
After our tickets got scanned we received our table number along with the color of the knight we’d support and a crown of the same color: the Blue Knight. Other knights are the Yellow Knight, the Black and White Knight, the Red Knight, the Green Knight, and the Red and Yellow Knight.
Once we entered we could take a picture with a Medieval Lady to purchase as a souvenir but we didn’t do that. Then we entered the bar area, the Great Hall, 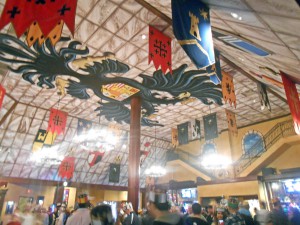 which was super crowded. Drinks from the bar are not included in the ticket fare so we didn’t purchase anything there. In the same area you’ll find several gift stores opposite of the bar.
We left that area and went towards the right of the reenactment arena where we found more gift stores, restrooms, the Museum of Torture which you can visit for a $2 admission fee and a gallery of swords of famous adventurers and warriors like Lancelot, Siegfried, Charlemagne, Columbus, and King Arthur, just to name a few. 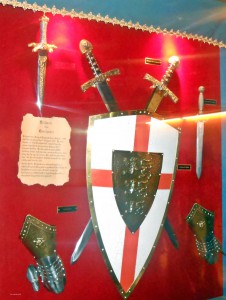 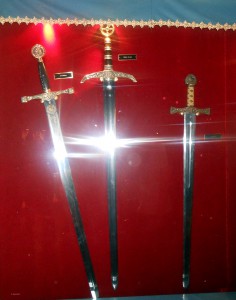 At 4:45pm the doors to the arena opened and we were seated in an area which had the color of the knight we’d support.
You sit at long tables facing the arena. We had a great view, right on the opposite side facing the Throne of the king on the other end of the tournament field. 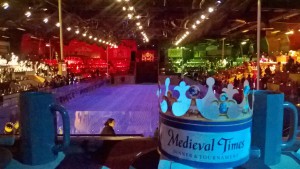 A few minutes later our server introduced himself to us and gave us some Dragon Blood (tomato soup) as our first course of the dinner. The soup didn’t taste freshly made but it was still good enough. Part of this first course was also a slice of garlic bread but I had already finished my soup when it arrived in front of me. The bread tasted delicious though.
Drinks that were included in the ticket fare were Pepsi, Diet Pepsi and tap water.

We were welcomed by the Lord Chancellor who introduced the knights and the king, Don Carlos, who then introduced his daughter, Princess Catalina.
As we received the second course of the feast, which consisted of a chicken half, corn and a herb-roasted potato half, the tournament began and our knight did quite well in his tasks.
The tournament has several intermissions such as performances of horses 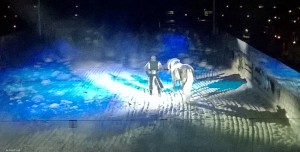 by with the Master of Horse and a live flight of a falcon with the Royal Falconer. Every now and then the Herald of the North interrupts the tournament asking for Princess Catalina’s hand in marriage to his king, the King of the North. 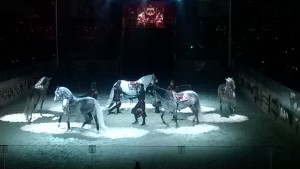 Between main course and dessert the knights fought on their horses with their lances. When one fell off his horse they’d continue their fight on the ground with a weapon of their choice: sword, axe or morning stars.
Our knight lost the battle to the Black and White Knight who later won the tournament and fought against the Herald of the North whom he also defeated so Princess Catalina didn’t have to marry the King of the North.
Dessert was a delicious warm pastry called Pastry of the Castle, puff pastry filled with apple.

I really enjoyed the tournament. I’m always a bit concerned about the health of the animals participating in shows like that but Medieval Times vows that the horses are treated “royally”[1], and I couldn’t find anything contradicting on the internet. I was a bit disappointed about the pace of our server but if you have to serve two tables of about 20-25 people in total at the same time and are also a member of the show, meaning you have to participate in it, it probably takes time. I learned after the soup that I should rather take my time eating which is also healthier so maybe the slower pace was a good thing after all. We were distracted by the ongoing show anyway. There was enough food to be filled but not too full after the show. I don’t think it’s worth it to spend the full ticket price though, $62.95 per adult. We bought our tickets through a special two for one offer.
At some point I found the person, a man of maybe 60 years, next to me sleeping after he finished his meal. I don’t know how he managed to fall asleep though because with the action of the show and all the cheering going on around us it was really loud and exciting instead of sleep-inducing or boring.