Today John had a day off and we decided to go on a day trip to the Liberty State Park in Jersey City, NJ (1 Audrey Zapp Drive, Jersey City, NJ 07305, http://www.state.nj.us/dep/parksandforests/parks/liberty.html).
The State Park is home to the Empty Sky 911 Memorial, the Central Railroad of New Jersey Terminal, the Hudson River Waterfront Walkway, Freedom Way, the Liberty Science Center and the Liberation monument.
Ferry service to Ellis Island and the Statue of Liberty are available from here, too. 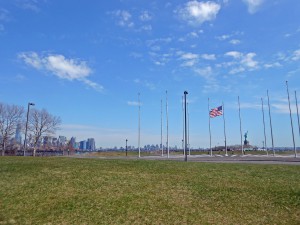 We arrived at the south end of the State Park near Morris Pesin Drive. 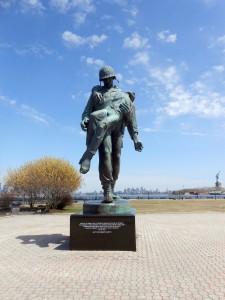 This part of the park contains the Liberation Monument, which is a statue of an American soldier carrying an inmate of a German concentration camp. It commemorates the Holocaust.
We had lunch at the waterfront while having a fantastic view at Lower Manhattan, Ellis Island, the Statue of Liberty, and the Upper New York Bay. 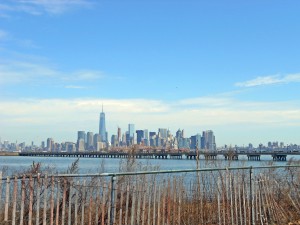 From there we drove on the Freedom Way to the north part of the park but you can also walk the Hudson River Waterfront Walkway to get there. The north part hosts the Empty Sky 911 Memorial and the Central Railroad of New Jersey Terminal. You also have a breathtaking view of Lower Manhattan and Midtown. This is where the ferry to Ellis Island and the Statue of Liberty depart. We didn’t go to Ellis Island and the Statue of Liberty today though because John had been there before and I had been there when I first visited New York City in 2012. 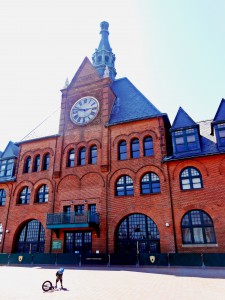 The Central Railroad of New Jersey Terminal is a defunct historic building. It used to be where immigrants boarded their trains to their final destination after being greeted at Ellis Island. In front of the terminal you can still see the docks where the ferries from Ellis Island landed. The terminal was badly damaged by Hurricane Sandy in October 2012 and remains closed while construction is ongoing. 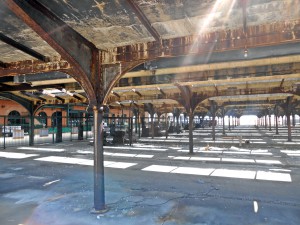 The Empty Sky 911 memorial stands to the right of the terminal building, just across the World Trade Center site on the other side of the Hudson River. 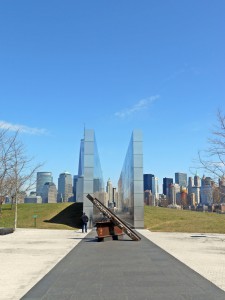 It commemorates New Jersey’s victims of the September 11 attacks. It consists of two walls standing parallel next to each other with a path in the middle leading towards Ground Zero. When you’re standing in front of it, it reminds you of the twin towers that used to stand in Manhattan. Walking through the memorial you can read the names of all the victims of 9/11 from New Jersey.

What I loved most about the park is the breathtaking view of the Manhattan skyline, Ellis Island and the Statue of Liberty. I’m always fascinated when I see just a glimpse of the skyline and being so close to it is even more amazing to me. Unfortunately, there’s not so much to do there besides taking a walk and admiring the scenery which is probably because most visitors come there to get on the ferry to visit Ellis Island and the Statue of Liberty.
I, for example, would visit a museum inside the Central Railroad of New Jersey Terminal expanding the exhibition at Ellis Island.