On the third day of our trip to the Florida Keys, we went to Key West which was about half an hour to 40 minutes from our hotel, all the way at the end of the Overseas Highway, crossing the famous 7-mile bridge.

But first we had breakfast at an IHOP (6495 Overseas Highway, Marathon, FL 33050, http://restaurants.ihop.com/fl/marathon/360036). I had strawberry pancakes. They tasted good but I prefer staying in for breakfast. If I stay at a hotel that doesn’t offer breakfast I usually don’t eat anything or just eat something quick on the go. I’m also not one who puts up a whole meal for breakfast, I just have a little bite and that’s it. So if you like big and long breakfasts, IHOP might be the place for you.

Then we started our journey to Key West. I really enjoyed driving on the Overseas Highway: you don’t have to worry about making turns and you always drive along the ocean, it’s very scenic.

We wanted our first stop in Key West to be the Southernmost Point of the continental USA. Unfortunately, neither tripadvisor nor the bing search engine on my phone had the correct address. So instead we drove around the town for a while and finally decided to park on a parking lot close to Mallory Square which looked like the historic town center. Parking was not exactly cheap but I expected it to be rather expensive in this location. Each of us paid $4-5 for 8 hours, so a total of about $16-20. 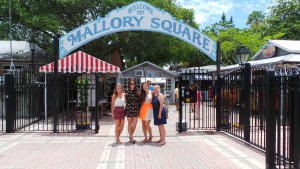 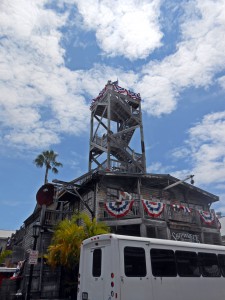 the Key West Shipwreck Museum (1 Whitehead St, Key West, FL 33040, http://www.keywestshipwreck.com/). We didn’t go up there but, according to one of the greeters of the museum, its tower has the best view over the town.

After asking around we finally found out how to get to the Southernmost Point. We would have to walk down Duval Street and make a right at the end. 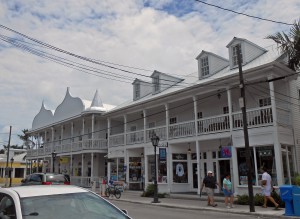 Duval Street is Key West’s main street running from the Gulf of Mexico to the Atlantic Ocean. Along Duval Street you find Bahamian and Spanish influenced Victorian houses home to bars, boutiques, inns or art galleries. The street would be a great spot for a Pub Crawl. Most of the bars don’t even have windows, and are just open to the street and you hear live music or Caribbean and Hispanic music everywhere, especially the later it gets. 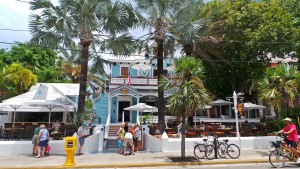 The Key West Hard Rock Café (313 Duval St, Key West, FL 33040, http://www.hardrock.com/cafes/key-west/) is located at Duval Street too, a must stop for me to get my t-shirt and the most beautiful Hard Rock Café I’ve ever seen. 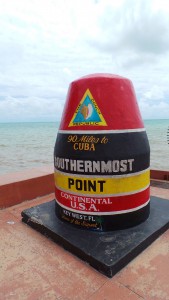 The Southernmost Point is a tourist magnet in Key West. When we got there, the line to take a picture was long and we didn’t want to wait as it already took us so long to even get there. So instead we took a selfie from the sidewalk next to it in between the change of tourist groups.

From there we went to look for a nice beach to spend the afternoon. This was an idea by my fellow travelers. I’m more of a cultural traveler and would rather have visited the Ernest Hemingway Home and Museum (907 Whitehead St, Key West, FL 33040, http://www.hemingwayhome.com/) instead.
During our quest for a nice and not too crowded beach we walked through some nice neighborhoods though and had a drink of coconut milk (out of a coconut) at a local convenience store. The owner was totally fascinated by us and took several pictures of us, with our cameras. 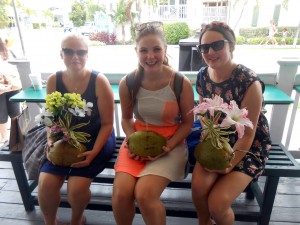 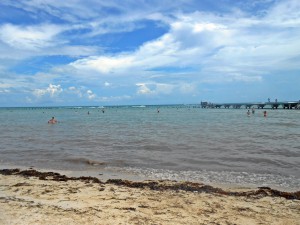 At around 6pm, we made our way back to Duval Street where we wanted to have dinner. We decided on a small Mexican restaurant, the Old Town Mexican Café (609 Duval St, Key West, FL 33040, http://www.oldtownmexicancafe.com/). I had Chicken Chipotle Chimis which were delicious and as an appetizer we shared Nachos with salsa and guacamole. The restaurant had a garden-like atmosphere. It was like sitting on the porch of a house, surrounded and covered by some trees decorated with fairy lights. The only negative thing to say about the restaurant was that we couldn’t split our checks paying by credit card, we could only split them in half. We did that but one of my friends later found out she was charged twice and it took her a while to get the money from the second charge back.

From the Mexican restaurant we went back to the Mallory Square area to watch the sunset. Unfortunately, it was pretty cloudy because rain was forecasted for the night and there was an island in our way. To have the ideal spot to watch the sunset you’d probably have to be on the water. 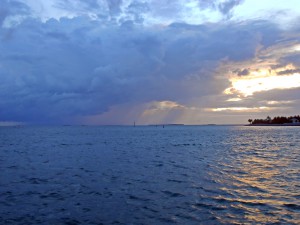 After watching most of the sunset we left Key West. Just shortly after we left it started raining heavily and we could hardly see, especially because it was dark by now. We went dreadfully slow, but made it safely to the hotel.

The next day we would go back to Orlando.