At the beginning of August 2014, three friends and I went on a trip to the Florida Keys. It’s about a 6-hour drive from Orlando to Islamorada where we had booked our hotel, the Sands of Islamorada Oceanfront Resort (80051 Overseas Highway, Islamorada, FL 33036, http://www.sandsofislamorada.com/). We also wanted to have a look Fort Lauderdale on our way to the Keys.

We rented a car with Amigo’s Car Rental (http://www.amigoscarental.com/en) which is a local Floridian rental car company with stations in Orlando and Miami only. They had the best rate and it was also possible to put down someone else’s credit card as a deposit for me driving because I only had a debit card. For 4 days, we paid about $185 for a car from the compact category including a Collision Damage Waiver. Our car was a black Toyota Camry which fitted the 4 of us and our luggage very well. 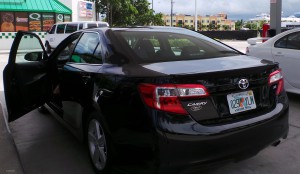 The lady from the car rental office picked us up to get the car from her office at the Radisson Hotel Orlando – Lake Buena Vista (12799 Apopka-Vineland Rd, Orlando, FL 32836, http://www.radisson.com/orlando-hotel-fl-32836/fllabuvi).

We drove from Orlando to Fort Lauderdale. We didn’t stop there as planned because there was a thunderstorm on its way and the parking rates in the touristy area of Fort Lauderdale were immense. 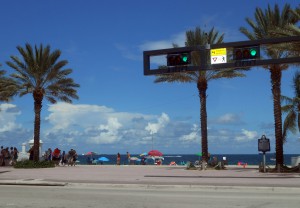 Summer in Florida is always very wet and humid. It gets really warm but it also rains a lot, sometimes only for about half an hour, sometimes for some hours straight.

So, we just drove through the main tourist area of Fort Lauderdale. It seemed like a beautiful city, rather calm but close to Miami. From what we saw though it comes up to its reputation to be a destination for rather wealthy people as we saw a lot of yachts in the channels of the city. 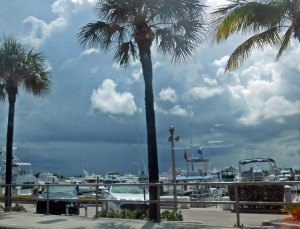 From Fort Lauderdale we drove straight to the Keys and just as we entered the Overseas Highway which leads from continental Florida to Key West, the sky turned dark and an absolute downpour erupted on us. Even though we could hardly see, we continued driving though we went dreadfully slowly. 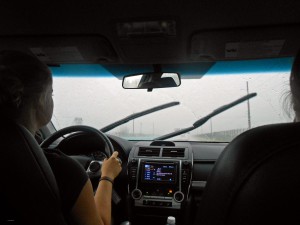 As we got to Key Largo, the first of the Keys, the weather cleared, with only drizzling rain persisting. From there it was only about half an hour until we’d reach our hotel. It was nice to just drive straight from island to island. We missed the driveway to our hotel about three times because it’s a very small hotel and it was rather hidden between other hotels which were bigger. By the time we got there it had finally stopped raining. 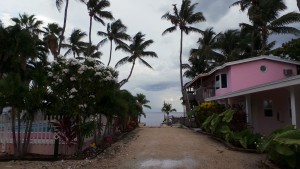 When we got there and wanted to check in we realized that there was a misunderstanding. It was my fault because when I sent the hotel an email asking if they’d have a room available for 4 people for 4 nights, the owner replied she’d have a room with a King size bed. Somehow I took it as a room that’d accommodate 4 people. It was OK though because we could have a rolling bed for one of us and the King size bed fit 3 people. We were lucky she didn’t send us away because it was already hard enough to find this hotel. The hotel had a small pool and a hot tub and in the back it had a small pier that led into the water. Unfortunately, the water stank so you couldn’t stay on the pier for long.

It already was late afternoon when we got there so we only decided on where to have dinner and went to a restaurant just a few properties further called Lazy Days (79867 Overseas Hwy, Islamorada, FL 33036, http://www.lazydaysrestaurant.com) which served mainly seafood and where we could have dinner on the beach. The food was moderately priced and delicious but the servings were big so none of us could finish our plate. 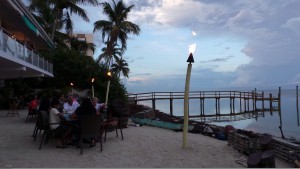 The next day it was overcast. We went back to Key Largo where we went to John Pennekamp Coral Reef State Park (102601 Overseas Highway (MM 102.5), Key Largo, FL 33037, http://pennekamppark.com). I had read about it before and especially wanted to see the 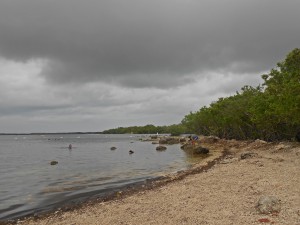 underwater statue, Christ of the Abyss. Unfortunately, you couldn’t go there by glass bottom boat or kayak which made it impossible for me to go there because once my snorkel filled with water and instead of breathing I kept on swallowing salt water and thusly panicked. Since then I’m deathly afraid of snorkeling. It looked like it would rain again soon so we decided to wait and see how the weather would turn out before choosing to do one of the other tours offered. In the meantime, we went swimming for a bit and after less than an hour it started raining again and we left. 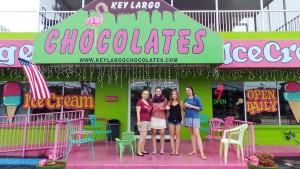 Chocolates (100470 Overseas Hwy, Key Largo, FL 33037, http://www.keylargochocolates.com) where we tried some Florida Keys Fudge and had ice cream. The treats they sold where delicious and they make them all themselves! 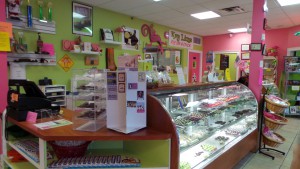 For dinner we stopped at a Domino’s Pizza store and bought 2 pizzas and two bottles of wine next door at the supermarket and had that by the sea at our hotel.