At the end of September/beginning of October 2014, John and I went on a cruise. We decided on a 4-day cruise to the Bahamas with Norwegian Cruise Line (http://www.ncl.com) based on their port of calls during the trip. It was $520.92 total for both of us and it included accommodation, meals in complimentary dining venues on the ship, some beverages, use of the pool and hot tubs, poolside activities, access to fitness facilities, and sports courts facilities.

The ship departed from Miami. We rented a car with Avis (http://www.avis.com/car-rental/avisHome/home.ac) which we picked up at the Hilton hotel close to Downtown Disney, the Hilton Orlando Lake Buena Vista (1751 Hotel Plaza Boulevard, Hilton Hotel Disney World, Lake Buena Vista, FL 32830). The Avis station was located to the left off the lobby inside the hotel on the ground floor. We decided on Avis because they have a shuttle service from their Downtown Miami Avis station to Port of Miami. 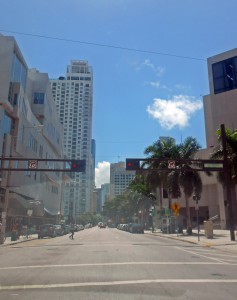 There was almost no traffic during our 3 hours drive down to Miami. We dropped the car off at the station in Downtown Miami and took the Avis shuttle to the Port of Miami along with several other tourists. The driver dropped us off right at the Norwegian Cruise Line dock and we had someone from the cruise line pick up our luggage right when we got there to take it on the ship for us.

We had already registered online and printed our e-documents which served as our boarding pass, and included information like the departure date and itinerary. We also decided on some shore excursions prior to the cruise.

We went through a terminal similar to when you take a flight. You also go through security and passport control. It’s also advised that you board about 2 hours before the ship sets sail.

Our room was on the 7th deck of the Norwegian Sky, so pretty much in the middle. 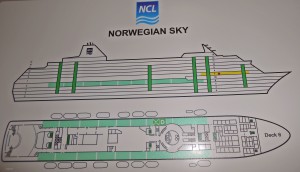 It was a Stateroom so we didn’t have any windows. The room was small though still larger than I expected. We had a small private bathroom, a couch and a Queen size bed. 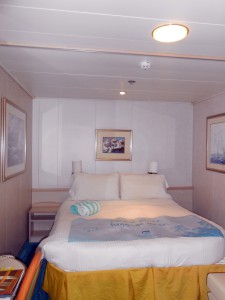 Right before we left the port we had to attend a safety training seminar.
The ship left Miami at about 5pm. We always made a point to watch the ships departure from the ports. 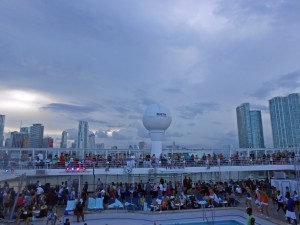 We ate at the complimentary dining venues every night. We usually had lunch at the Garden Café buffet or The Great Outdoors buffet. At night we’d dine at either the Crossings Main Dining Room or the Palace Main Dining Room. They were both good. I especially liked the bread they offered with butter before they served the main courses. When the ship docked at Nassau we had pizza and pasta at the on-board Il Adagio Restaurant which was included in the fare. John especially liked that because pizza is his favorite food.

The first port of call was Freeport on Grand Bahama Island. 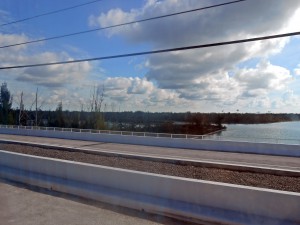 We booked a tour to the Lucayan National Park and beaches, called “Caves & Beaches.” We went to the National Park first. Our guide was informative in a funny way. He told us some anecdotes about abandoned houses and floods and what it’s like to live on a Bahamian island.

At the Lucayan National Park we visited Ben’s Cave. 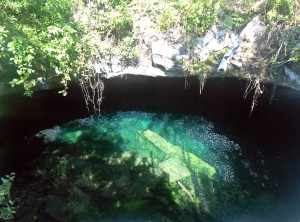 Its entrance was created when a portion of the roof of the cave collapsed. 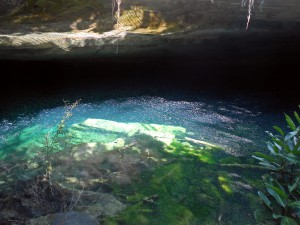 We also visited the Burial Mound Cave. It got its name from the remains of several Lucayan Indians that were found in a water-filled cavern near the cave’s entrance. Then we crossed Gold Rock Creek to get to the beach. I loved the beaches on the Bahamas; the sand was so white and the water so clear. 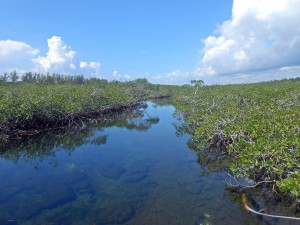 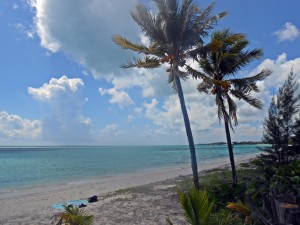 When we wanted to get back on the ship after the tour we ran into some difficulties because I didn’t know I had to take my passport with me whenever we left the ship to get back on and I’d rather leave it onboard than have it stolen from me while we’re on a tour. John verified I was the person he was traveling with though and at security inside the ship they also had my picture on file so I could get aboard.

Our next stop was Nassau.

This was the only port of call where we hadn’t booked a shore excursion because we thought Nassau was a touristy place and there’d be enough to do on our own. After lunch we took a stroll through the city 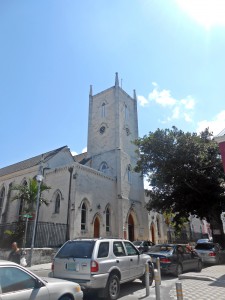 but you could definitely tell people there make a living from selling things to tourists and I felt like places outside the city center might not be very safe so I convinced John to go back to the port and get a taxi from there to the beach of Treasure Island. Treasure Island is where the famous Atlantis hotel is located.

The beach was beautiful and it was easy to get there by taxi and to get back to the port as well. On our way back our driver was a certified travel guide and she told us some facts about Nassau. We also crossed the Hard Rock Café which John and I had been looking for before because I wanted to get a t-shirt. I collect Hard Rock Café t-shirts from destinations I’ve been to.

The last port of call before we’d return to Miami the next day was Great Stirrup Cay. This is a private island of the cruise line which we got to with a shuttle boat. There we had booked a kayak tour. 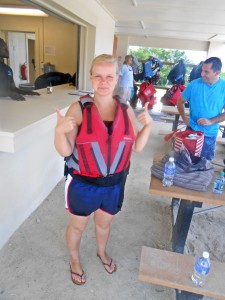 We’d kayak along the shore. We could see a lightning storm passing us several miles away but the water still was pretty wavy.
It was our first time kayaking and on the way to a tiny beach on the shore of the cay we had a really hard time paddling and steering at first but we finally made it. I was so afraid we’d fall into the water and John was cursing a lot. Our way back was easier. I was now giving directions and we did good but still managed to crash into another couple’s kayak a few times. In our defense I have to say that it wasn’t always our fault. I sure had a lot of fun. 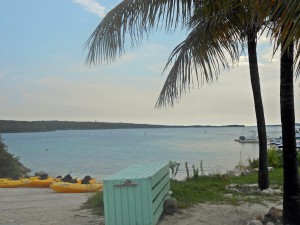 The rest of the day we just spent at the beach of the cay, tanning and taking a swim every once in a while. They also had a buffet on the island which was really good. 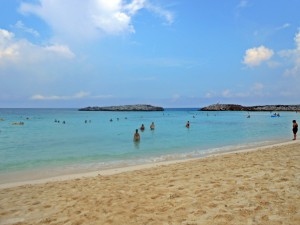 We took the shuttle boat back to the ship at about 3pm.

Over all I liked the cruise even though I wasn’t too convinced at first (even though I came up with the idea). It’s nice though that you spend the whole night at sea and the next morning you’re at another destination, a relaxing way of traveling. I also didn’t know if I might get seasick but it was OK. At tourism school we learned that you don’t feel that you’re on the water but John and I both felt it, not too much though, except for the first night when we still had to get used to it.

Back in Miami, we left the ship through passport control and took the shuttle to the Avis station in Downtown again. From there we went back to Orlando.

One thought on “Bahamas Cruise”