At the beginning of February, on a miserable cold and snowy day, I went to see my friends, Jenny and Matthea, in New York. We decided a while ago that we wanted to do the Sex and the City tour through Manhattan together.

So I took a train from Bound Brook, NJ, to New York Penn Station at 8:54am and arrived in New York about an hour and ten minutes later. A round trip ticket is $26.
Since our tour would start at 11am, I decided to take the Subway from Penn Station to the Plaza hotel where we would meet.

We took the On Location Tour (http://onlocationtours.com/tour/sex-and-the-city) which takes about 3.5 hours and costs $47 plus a $2 ticket fee. The bus leaves from the Pulitzer Fountain in front of the Plaza hotel.
Most of the time we were on the bus so it didn’t matter that the weather was bad. There are some locations where you’ll leave the bus but usually it’s just to get inside a building. You can always choose to stay on the bus, too.

The tour led us through Midtown, Greenwich Village, SoHo and the Meatpacking District, basically the neighborhoods where the Sex and the City girls mostly hung out during the show and the movies.

The tour starts with the Plaza hotel, where Carrie says farewell to Mr. Big on his engagement party to Natasha. From there we’d drive down 5th Avenue passing Tiffany’s, where Trey bought Charlotte’s engagement ring, and all the other classy stores along that street. We passed the restaurant where Samantha met her millionaire lover who was “a little” older than her, New York Public Library where Big and Carrie almost got married, the department store where the four discussed Alexander Petrovsky, the church of “The Friar” and the ABC furniture store where Charlotte had a fight over a bed with her mother in-law, Bunny.

Our first stop was the Pleasure Chest, the sex shop where the girls introduced Charlotte to the Rabbit.

After getting back on the bus we got cupcakes and the tour continued. We passed Aidan’s furniture company,  the bakery where Carrie and Miranda got their cupcakes, Charlotte’s gym and the boutiques along Bleecker Street. The highlight of this part and most probably of the tour – at least it was for me – is seeing Carrie’s brown stone house. Our tour guide walked there with us and showed us the best spots to take pictures. Unfortunately, you can’t step on the stairway in front of the house. 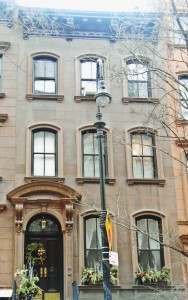 My guess is that there were too many fans visiting the house and leaving their marks that the people who live in the building got annoyed and put up the sign and rope that prohibits you from stepping on the stairs.

In the Meatpacking District, we visited the site of Carrie’s and Big’s rehearsal dinner for the wedding that didn’t happen: Buddakan.

It offers modern Asian cuisine and the prices on the menu didn’t even look too expensive. You’ll also get a coupon for a free drink with a meal when you attend 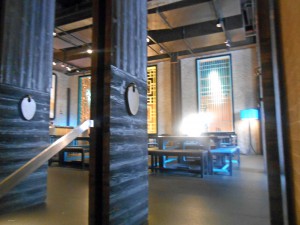 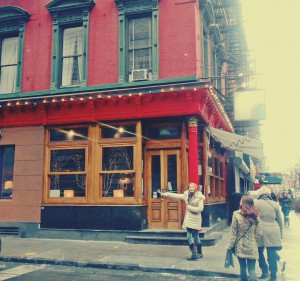 Another stop of the tour is the bar Onieals which served as Steve’s and Aidan’s bar, Scout, in the series where you can purchase a Cosmopolitan during the tour for $8 instead of the regular price, of course we had one each 😉

Throughout the tour, your guide will point out the many stores we passed so you know where you can shop like in Sex and the City, at Diane von Furstenberg, Patricia Field, Bergdorf Goodman, Tiffany’s, Jimmy Choo, Manolo Blahnik and many more. We also received a 20% off coupon for Michael Kors’ boutique close to “Carrie’s house”.

After the tour you’ll be let out at the HBO store, close to the New York Public Library which we visited for some sightseeing.

I had a great time during the tour. We saw a lot of Manhattan even if it was focused on the Sex and the City theme with videos from the show and the movies whenever we were driving.
Our tour guide’s name was Staci and we loved her hair. She was very entertaining, funny, sassy and sarcastic which I really liked. She made it a fun trip that I’d recommend to friends and fans of the show.