We booked the car with National car rental in advance for $373.75. This is the base price. At the airport we were charged some additional prices though. We registered me as an additional driver for $9.99 per day, and we bought the Loss Damage Waiver car insurance for $99.96 ($24.99 per day) which would apply if the car was stolen or physically damaged, this and taxes, Florida surcharge and other additional fees added up to a total of $531.17 for a one way trip.

When we got to the airport garage we weren’t helped accurately. A woman greeted us and showed us a car and said if we’d wanted another car we’d have to go all the way to the end of the lane for additional options. We just wanted to have a look what other options we had so we went down the lane only to find out that there were none for the category we booked so we took the car she showed us: a white Hyundai Accent which was part of the Compact rental car category, a smaller car would have been less expensive but our luggage wouldn’t have fit since I moved everything I had from Orlando to Middlesex

From the airport we drove to my apartment to get all my belongings. The car was just big enough for everything to fit.

At about 1pm, we finally left my apartment complex northbound to Savannah, Georgia, our first stop. We decided to take the I-95 so we wouldn’t have to pay any tolls. The I-95 runs parallel to the Atlantic Ocean and starts in Miami, FL, and ends at Houlton – Woodstock Border in Maine.
First we drove east on the I-4 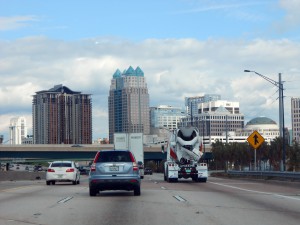 and close to Daytona Beach, FL, we entered the I-95. On our way north we passed St Augustine and Jacksonville 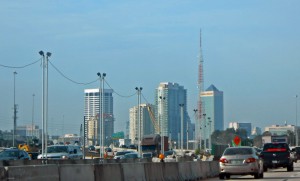 and small creeks and lakes, entered Georgia and arrived at our hotel at about 5pm.

We were staying at the San’s Boutique Hotel & Suites (480 Al Henderson Blvd, Savannah, GA, 31419, http://www.sansboutiquehotel.com), just off the I-95 and south of Downtown Savannah. We quickly checked in for the night since we wanted to go and explore the Historic District before it would get dark.

Savannah is the oldest city in Georgia and ever since I saw the movie and read the book, Gone with the Wind (my all-time favorite movie), I wanted to go there.

We parked the car in a public parking garage only a block from Savannah City Hall. We strolled along Bay Street, passing small parks, souvenir shops and 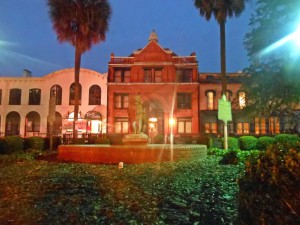 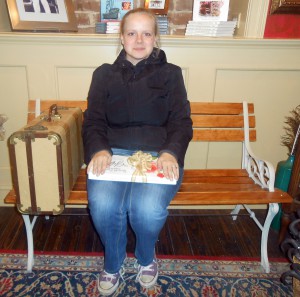 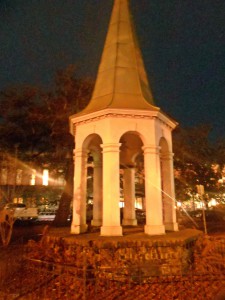 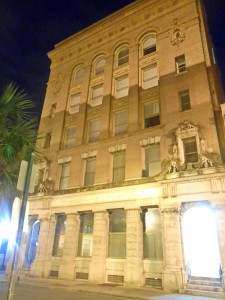 restaurants, then took a left down a cobble stone street to the riverside of the Savannah River and took a walk along the stream towards the harbor on River Street with its many taverns and restaurants. 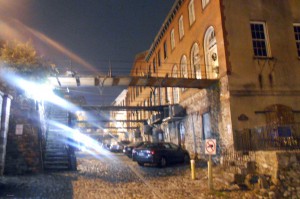 Since this is a tourist spot in Savannah, we came across several, we thought they are homeless, merchants trying to sell palm tree roses. We managed to get out of the way of most of them but one was very persistent, telling us how the roses will reflect our love for each other, calling me John’s Queen and he made John confess his love to me many times, so that we ended up buying 4 of those roses for a total of $20. So, if you don’t want to fall into this tourist trap, keep an eye out for those merchants.

Since it was already dark and we wanted to leave early the next day we went back to our hotel at about 8pm. For the public parking, we paid very reasonable $2.50.

We had dinner at a Ruby Tuesday right next to the hotel. The food was good and the waitress served us well.

When we came back to the hotel we asked at the reception when the continental breakfast would be served the next morning. She said the buffet would open at 6am. Since we wanted to leave early we decided to be downstairs around that time.
Our room was clean and had two Queen-size beds and a private bathroom for a rate of $70 including continental breakfast. We booked the hotel well in advance through Expedia.

We went to a local Wal-Mart and got us granola bars and something to drink as a breakfast and snacks for the road and then headed North towards our next stop, Richmond, Virginia.
Next time I’ll tell you about our second part of the road trip.