A few days before it was time for me to leave Walt Disney World, my fiancé, John, came down to Florida to pick me up.

As usual, because I didn’t have a car, I took the Supershuttle from my apartment to the aiport, which costs about $20 one way (but you can always find coupons on the internet).
We met at Orlando International Airport and took Mickey’s Magical Express to our hotel. Mickey’s Magical Express is a complimentary shuttle service that you can choose when you book your Disney resort. It leaves from the Ground Transportation level on the B side of the airport.

From the beginning of my program about a year before, I wanted to stay at Disney’s Wilderness Lodge, even if it was just for one night, so as I got a 60% room discount as a holiday benefit from my job, I decided that’d be the hotel we’d stay at our last stay. 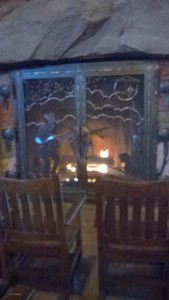 Lobby level. At first it was a bit confusing to figure out our way there with us never having been there before but once we found our room we always found our way there again easily.
Our room had a small balcony and looked, as booked, on the courtyard which looks like it was somewhere in the Rocky Mountains. In the center of the courtyard is a large waterfall that plunges into the main swimming pool, Silver Creek Pool. Even though the pool is heated and it just got warmer after a cold front, we didn’t have the time to enjoy the pool. 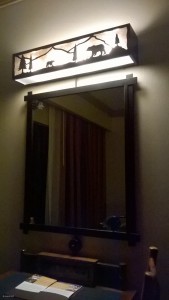 The room had two Queen-size beds, a TV, a table with two chairs, a nightstand with an alarm clock and telephone, a fridge, two sinks and a bathroom. What impressed me most were the details in the room: everything looked like I’d imagine a room in a lodge in the wilderness to look like and it even had some wilderness Disney character tiles showing Meeko from Pocahontas, Bambi and Chip n’ Dale in the bathroom. 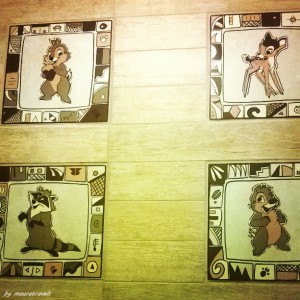 The staff at the resort was very helpful, especially when I forgot to print out our tickets for Disney Quest. The concierge cast member, Samuel, gave me his email and I sent our tickets to him and he printed them for us.

On our first night, we had dinner at the Tokyo Dining restaurant at the Japanese Pavilion at Epcot. We had a great table close to a window wall from where we had an amazing view of the fireworks show, Illuminations – Reflections of Earth, which takes place every night at 9pm. As an appetizer, we had the Panko Oyster which was delicious. As an entrée, I had the Bento Box which was sliced steak, Sashimi and California Roll, Tempura Shrimp, and vegetables with beef rice. It was really good but almost too much. Even though we were nearly full, we decided to have Green Tea Cheesecake as a dessert. It comes with a raspberry sauce and tasted exquisite. 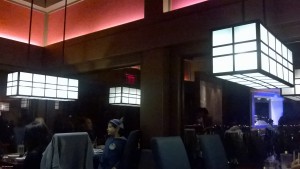 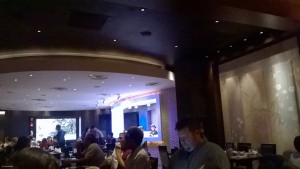 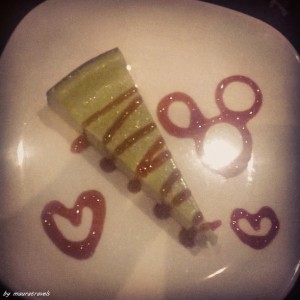 On our second day, we went to Disney Quest at Downtown Disney which is an interactive indoor theme park, basically like a 5-floor arcade. All games, except for the ones where you can win prizes are included in the admission of $45 per adult ($39 per child). I’m not a huge computer game buff but John likes arcades and we had a lot of fun.
At night, we went to the ‘ohana Restaurant at Disney’s Polynesian Resort with John’s parents. It’s an all you care to enjoy restaurant. Servers will bring meat skewers to your table, as well as dumplings, chicken wings, lo mein noodles, salad and stir-fried vegetables. It was my second time there. I had to come back because I loved it that much the first time I went. It’s always very good.

We spent the third day at Hollywood Studios where I wanted to meet Scully and Mike from Monsters Inc., we also rode on the Great Movie Ride and went to see the Indiana Jones Stunt show as well as the Lights, Motors, Action! Extreme Stunt Show. 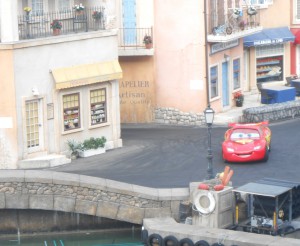 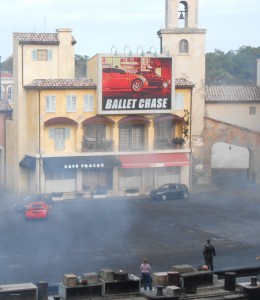 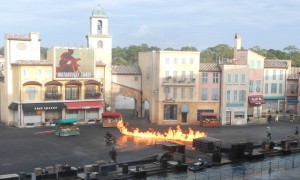 At night we had dinner at the Trail’s End Restaurant at Fort Wilderness. I didn’t know that it was also a buffet so we had two large dinners in a row which both were really good so when we got back to the hotel we were so full we actually felt sick. The Trail’s End is a buffet with American food such as ribs, roasts, mashed or baked potatoes, vegetables, salads, ice cream, and desserts in a rustic Western setting. I even got my lemonade in a Mason Jar.

On the fourth and last day at Disney World I first had to say farewell to my workplace and coworkers at the German pavilion in the afternoon. Then we 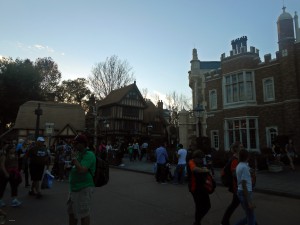 made our way through Epcot where we had dinner reservations at the Rose & Crown Pub & Dining Room of the UK pavilion. I liked the style of the restaurant, it really looked like an English pub. I wasn’t too happy with the choice of entrées they had on the menu but still found something I liked: Pan-roasted Scottish Salmon. It was a piece of salmon on top of mashed potatoes and a mustard vinaigrette. As a dessert I had a Banoffee Tart: banana, Whiskey-Caramel, sweet cream and chocolate. Delicious!

At night I wanted to see Wishes, the fireworks at Magic Kingdom, one last time. We took the boat from our resort to Magic Kingdom. What I didn’t know was that the park closed earlier that day so we saw parts of the fireworks from the water, which was nice, too, but not as beautiful as seeing it from inside the park. Instead we went from Magic Kingdom to Epcot to watch Illuminations again.

Our departure from the hotel went smoothly. We took the Mickey’s Magical Express again which took us to the airport where we rented a car for our road trip which I will tell you more about in another post.